Versioning is the process of assigning unique version numbers to unique states of a knowledge article.

PHPKB is a knowledge base software with version control & comparison features where every update made to the knowledge base article is recorded as a version so you can find out what was the content of an article on a specific date and compare it with the latest version to see the changes between both versions.

What is Document Versioning?

Document Versioning refers to the creation and management of multiple releases of a document, all of which have the same general function but are improved, upgraded, or changed. Versioning is the process of assigning unique version numbers to unique states of a knowledge base article. These numbers are generally assigned in increasing order and correspond to new changes in an article. In the context of knowledge management, this term applies especially to knowledge base articles. Many companies are required to maintain a history of the articles that they house on knowledge.

Have you ever updated an article in your knowledge base only to realize later that you accidentally removed an important paragraph? PHPKB software stores a version history of all your knowledge articles. This really helps you get protection from accidental changes to an article and roll back to one of the previous versions whenever required. Some knowledge base documents go through a number of revisions before they become the final document and it is often important to retain these different versions so as to ascertain the development of the final document.

PHPKB knowledge base software provides the document versioning feature where all knowledge base articles (documents) are versioned, meaning that whenever you save the document, it is automatically saved as a new version. Typically when you save a document in some word processor software, the previous version is overwritten - unless you save it with a new name every time.

A version has seven major attributes:

Version comparison allows you to know the difference between different versions of an article so that you can easily compare the latest version of a knowledge article with one of the previous versions to know about the changes made in it. It compares two versions of an article and highlights what changed between them as shown in the image below. The versions that are being compared are not changed. 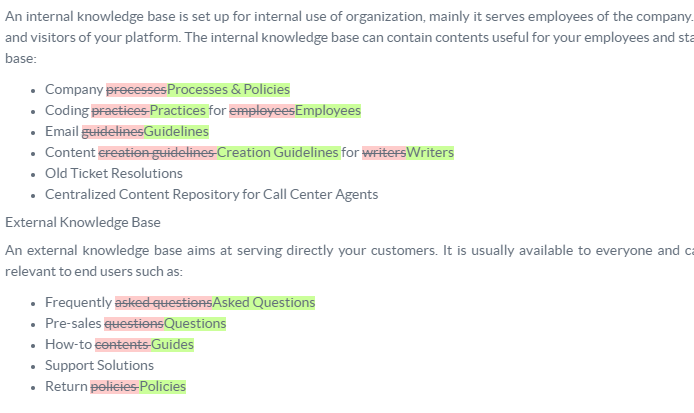 A history of the various versions of an article/document in the knowledge base can always be viewed under the Revisions column of the 'Manage Articles' page. An example of such a Version History is provided in the image below.

Reverting to a Previous Version

It may happen that the latest version of the article is not the best version, for example, if a wrong version was restored by mistake, or if it is decided that all recent changes should be undone. Or it may be that you need to republish an article with the details of a previously saved version. In such cases, you can revert to a previous version of the knowledge base article.

To revert to a previous version.

Generally, you should not worry about deleting article versions, as there is usually enough room on the server for storing lots of versions of each article. Rather than risking deleting a version you later realize you did need, simply retain all versions. However, if there is a version of a document that you feel is important to delete, you can do so by simply clicking on the 'Delete' icon on the version to be deleted.

Versions of your knowledge base articles will automatically be saved as you edit them. This allows you to view past versions and revert to older versions if needed. If an article is modified, it is automatically saved as a new version. The version control contributes to collaborative editing so many people can work together to create and refine a knowledge base document. When you store a version of your article using the versions feature, you can access previous versions/revisions, delete any of the revisions stored with your article/document.